Remote Control for the MFJ-1788 Loop

I’ve enjoyed using my Flex 6300 on wifi from anywhere in the house for digital modes and SSB with SmartSDR 1.4. However, my MFJ loop antenna needs tuning every time I change frequencies, which requires a trip back down to the radio.

Being lazy, I wanted to be able to remotely tune the loop. My first thought was to add relays to the control box switches, but the schematics aren’t available, and I didn’t want to damage anything. Instead, I went for the ugly, but fun, hack of using a servo to press the buttons! 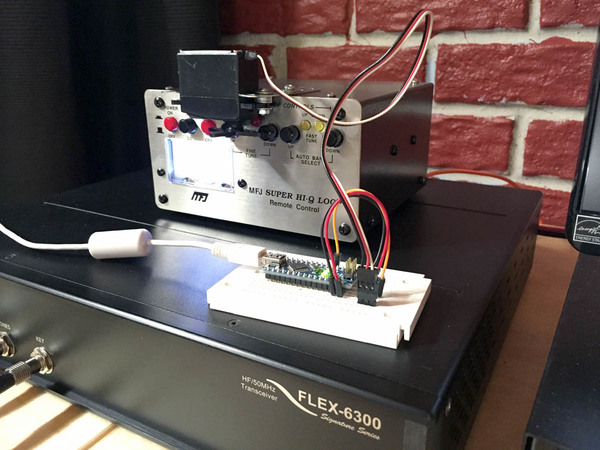 The servo is attached right over the slow tuning buttons using some metal brackets. On the servo is a horn, much like the type used for remote control aircraft, which just happened to be the right size to hit each button.

I’m just using one servo, and all it can control are the slow tuning buttons. That’s not a problem with the Flex as I can visually see where I’m tuned, and don’t really need the automatic tuning features of the control box. Using the slow buttons takes a while, but it’s not too bad.

The servo is controlled by an Arduino, which is then controlled over serial by a Rails application. With a web application I can easily control it from almost any device, and could set it up for WAN remote in the future.

The first row of buttons stops and starts continuous movement of the tuner. The other buttons make short movements for fine tuning. There is a slight delay as the servo moves, so having the ability to do short button presses makes it easier to get the tuning just right.

It’s a fun hack, and it works!