Over the past month I’ve bought and sold a few radios in an attempt to find something I really like. Here’s a short history of radios I’ve owned recently and some thoughts on each one.

These are mainly thoughts from a user standpoint, not quantititive testing or anything too fancy. I used all of these with my MFJ-1788 40M-15M magnetic loop.

I purchased an Icom IC-7100 in December, 2013, and used it all of 2014. It’s a great radio, and covers HF, VHF, and UHF with all modes, including D-Star. It’s designed to be a mobile radio, but I’ve only used it in the shack or camper on a desk. The touch screen is nice, but would be difficult to use in a vehicle.

The IC-7100 is really a nice radio, but I’m always adjusting things to tune and pull out weak signals. Touch screen with just a few knobs was cumbersome for quick changes.

For Christmas 2014 I bought myself an Icom IC-7410. It only covers HF, so I planned to keep the IC-7100 for UHF/VHF. This is a big radio with a very nice, crisp screen, and lots of buttons and knobs. The IC-7410 has a dedicated power control, which I always find handy as I like to keep power low and adjust as needed. 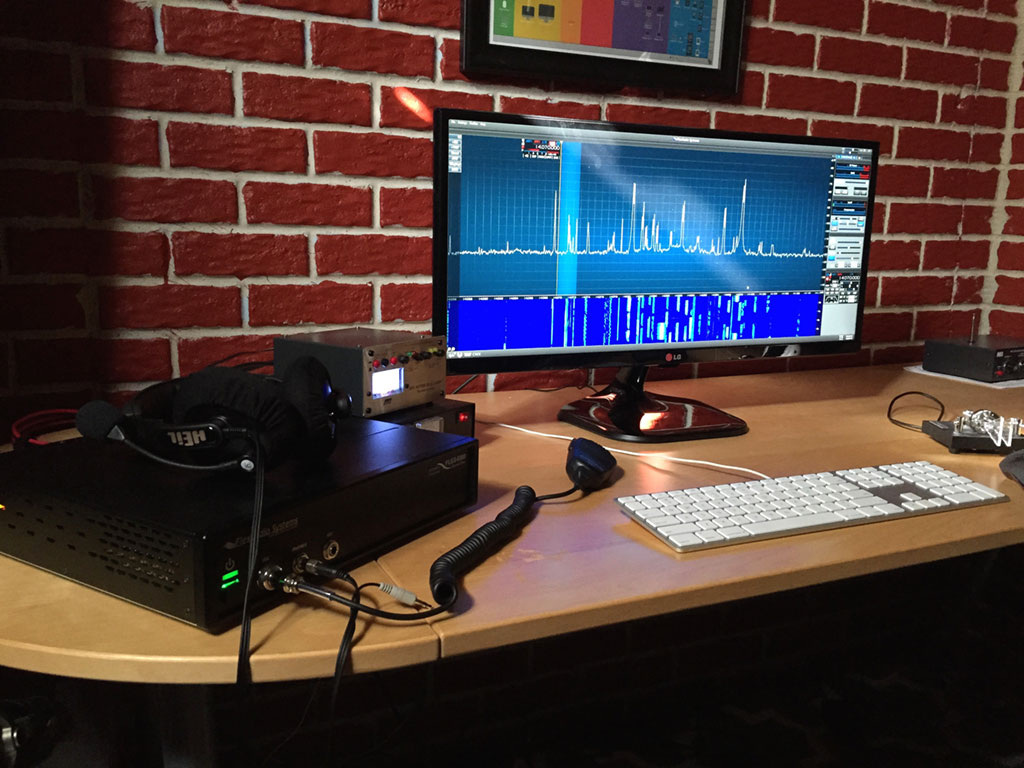 I really enjoyed the IC-7410, but the other day at lunch I was talking with some friends about the newer FlexRadio models. I have no idea why I never thought to try them before, but my friends were very convincing. As a test I ordered the somewhat inexpensive, but older, Flex 1500.

Wow! I’ve always had an RTL SDR with an HF upconverter, which is fun, but not a very good receiver. I setup my station to let me flip back and forth between the IC-7410 and the Flex 1500 and try various settings, filters, etc. The Flex 1500 was consistantly better able to pull out weak signals. The panadapter, even though it’s only 48k wide on the 1500, was amazing.

I’m just getting started with the 6300, but it’s incredible. It will show up to 7mhz on the panadapter, and seems to receive as well as the 1500, if not better. Tuning the MFJ loop is easy! I just zoom out the panadapter and can visually tune it almost perfectly. It also has a tune button with a separate power level adjustment. It drops me quickly to a few watts and transmits a tone for tuning, then returns to where I left off.

The 6300 connects via ethernet to my local network. I can be anywhere in the house and run the radio from my MacBook (under Windows 8.1). I’ve previouly used VNC to run digital modes off the laptop, but with the 6300 it’s a direct connection to the radio, and I run a local copy of SmartSDR (the 6300 control software) and fldigi.

As many have noticed, SmartSDR is not as mature as PowerSDR (on the 1500), but it should get better. A new release is expected this Friday, so I’m looking forward to trying it out.

I’ll say more about the 6300 after evaluating it a bit longer, but already I can’t imagine going back to a traditional radio. I’m keeping the Flex 1500 for portable use in the camper, so I’ll always have an SDR with me!